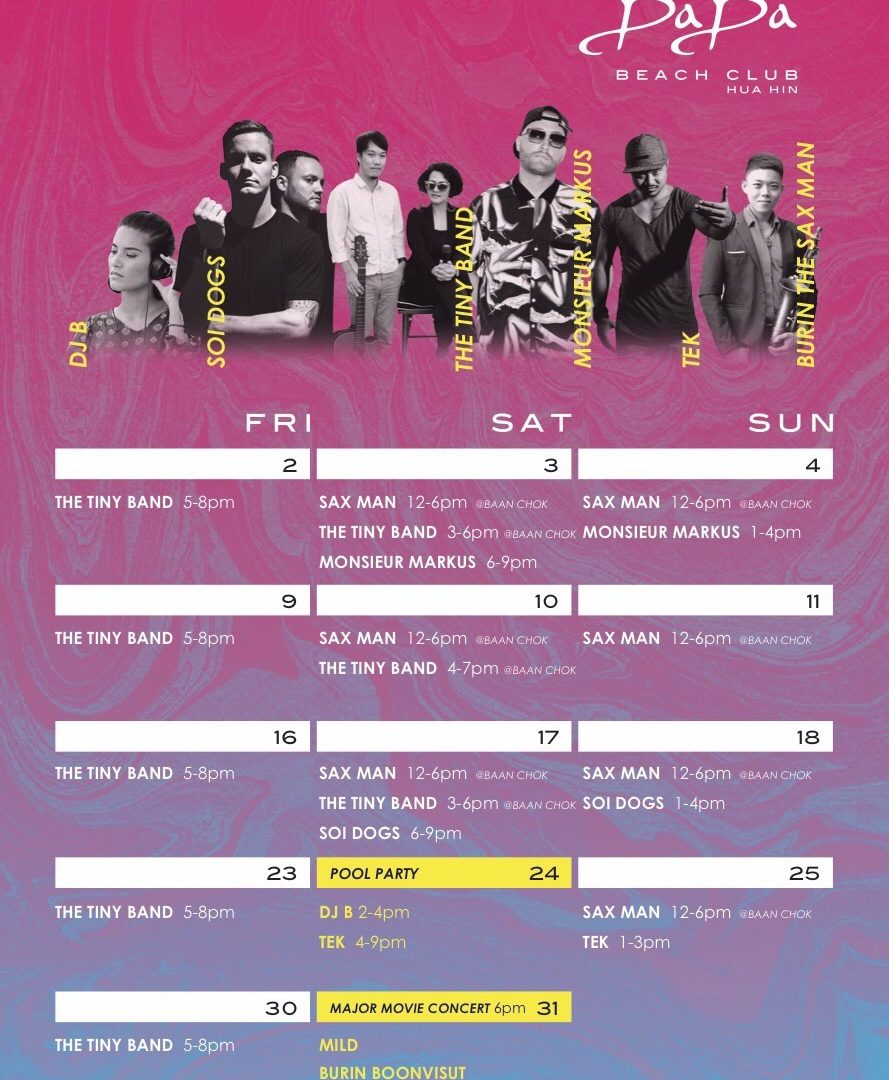 We proudly present this month’s playlist @ Baba Beach Club Hua Hin with live Dj sets by Monsieur Markus, Soi Dogs, performances by resident The Tiny Band and Burin The Sax Man. With an exclusive visit from Bangkok-based Tek Harrington. Join us and experience the unique #babavibe.

Monsieur Markus
Soul, Funk, House & Disco
Getting his lucky break back in 2007 at a friends bar in Helsinki, Finland, Markus has been playing in bars, clubs, and events in both Europe and Asia ever since. Since moving to Thailand in 2009, Markus has performed at some of Bangkok’s famous venues such as Bed Supperclub, Club Culture, Scarlett, Café Democ, St.Regis, and many more, as well as supported the likes of Dimitri From Paris, Bugz In The Attic, to name just a few. With influences and roots in disco, funk, soul, and balearic and rare grooves, the Finnish native’s groovy sound and signature mixes has made him a staple in the Bangkok music scene.

TEK
House & Disco
The British DJ of Thai descent, Tek Harrington grew up in England for over 20 years learning how to play records, mixing music and quickly grew a thirst for all kinds of music and its history. Later becoming an avid record collector himself, Tek has since moved to Bangkok and has expanded upon his DJ career as founder of The Backroom Directors DJ Agency, one half of the infamous Slum Disco Sound System, and music director at both Banyan Tree Hotel and the Park Hyatt. Drawing influences for his unique performances playing house and disco from soul, funk, jazz, disco, gospel, and everything in between finding the connections between each music genre. A fixture in the Bangkok music and club scene playing at famed local venues to bigger music festivals such as Kolour, Wonderfruit, and Quest, to supporting artists like Todd Terry, Joey Negro, Dimitri From Paris, Francois Kevorkian, John Morales, and Dicky Trisco worldwide.

SOI DOGS
House & Techno
Since 2013, when V.Alarik and Spencer stumble upon each other in the capital, they quickly became a part of Bangkok’s bustling underground house and techno scene where their work gained the attention of Trust. The Bangkok-based agency and events company got them working alongside artists like Wolf & Lamb, Jamie Jones and Seth Troxler to name just a few. The Soi Dogs duo continues to played at some of Bangkok’s prestigious events Kolour, and Sunn, as well as the iconic smaller local venues, now having expanded their reach and spread their sound to Singapore, Malaysia, Vietnam, and The Philippines.